Estimator
Save the search
Create an email alert

Kubota mini excavator U 17-3 A 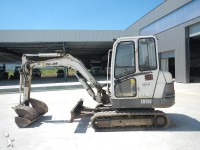 Excavators, also called shovels or diggers, are construction equipment used in levelling work. During earthmoving operations, excavators allow the operator to dig the ground and to extract earth and rubble from it. Depending on the attachments, they can also drill the ground, handle materials or cut scrap iron.

An excavator is composed of a chassis, mounted on track or wheels, a power unit, a house and of an articulated arm, which is composed of a boom and a dipper. Often equipped with a shovel dipper, the arm may benefit from a large variety of attachments: auger, hydraulic breaker, grapple, shears, grab bucket or sorting grapple… They are attached to the stick thanks to the bucket linkage which may be mechanical or hydraulic.

Europe-Construction-Equipment.com is a classified ads website for new, used or damaged machinery

Learn more about your favorite materials :