At the beginning of 2017, CASE launched a new range of mini-excavators from the C series. This range is complete since it has 6 models between 1,7 and 6 tonnes. Additional models are expected during the year. 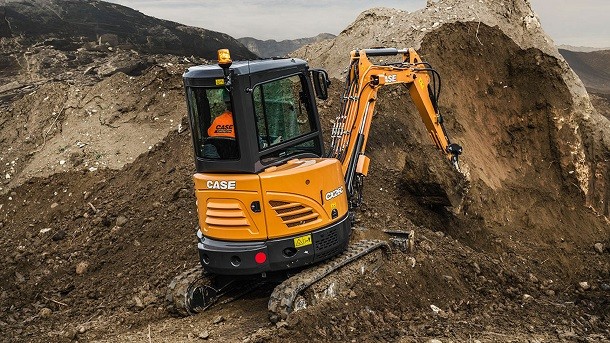 The new range of excavators from the C series is described by the make as including the first products from the alliance between CASE and Hyundai Heavy Industries. The excavators production is split between the two production sites of both makes.

Safety : a priority for CASE

The construction equipment manufacturer has improved the safety of their excavators by adding protection equipments for turnaround, tipping and falling objects.

The mini-excavators are also equipped with an emergency stop switch if needed. Moreover, the operator's view has improved with rear camera to reinforce safety on construction sites.

Both mini-excavator models, the CX17C and CX18C are made for confined spaces. Their compact dimensions allow operators to work in construction sites in the middle of cities. Indeed, the excavator's tracks are retractable so the machine is only one meter wide.

The make explains that the powerful hydraulic flow allows the machines to have an efficient digging force.  The improvments made to these mini-excavators help the operator work faster.

Excavators engineers also resolved the problem of the cab's comfort. Indeed, the driving area includes commands that are placed ergonomically. Finally, the driver can have an air-suspension seat.

The CX26C and CX37C models (2,6 tonnes to 3,7 tonnes) stand out by their digging depth as well as the large turning radius of the boom. The CX37 mini excavator can be equipped with steel tracks. Besides, several equipments can be added to these two excavators, for instance an anti-theft system or a board for waterproofed digital tools.

The two models CX57C and CX60C are the heaviest of this new range and stand out in terms of comfort. The operator is more comfortable with a heated seat and storage spaces in the cab. Finally, these excavators are equipped with with a tactile 5.7'' LCD color screen, a SD card reader, a USB port and a 12 volt plug.

Technical recap of the mini-excavators from the C series